We climb the steps onto the painted porch and pause to consider a fist-sized gash in the concrete. Had this been any other house, the damage might have been caused during a storm or a move. But this is the Martin Luther King Jr Montgomery home where the newly minted pastor lived during the landmark bus boycott that launched the Civil Rights Movement.

And that scar on what is now the wide porch of the Dexter Parsonage Museum was left by a bomb set off in 1956 by segregationists, who’d threatened to kill the activist pastor and his young family.

Maloney, two friends and I were on our way to a girl’s weekend at a nearby lake (more on that later) when we rolled into Montgomery, Ala. For a hot second, it was a toss-up between stopping at the Parsonage or at the Hank Williams Museum (likely to be the shorter stop).

For once, we chose wisely.

This neighborhood is a must-sees for anyone interested in racial justice and a more complete picture of history. It was inspiring to dive deeper into how a grassroots movement brought about major change.  And, honestly, if there was ever a time for a car full of white women to better educate themselves on part of the black experience in America, now is it.

“It’s incredible that an experience like this tour exists,” says our buddy Meg, co-founder of the loooooong forgotten parody brand TravelerFrauds. 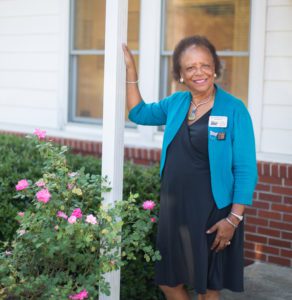 It’s one thing to know your civil rights history. It’s something else entirely to walk through one of its most powerful moments  – especially when your guide is a wealth of knowledge like Dr. Shirley Cherry, retired school teacher and general ray of sunshine. (For real. She’s who we want to be when — if? — we grow up.)

A tiny powerhouse aptly described as a “velvet hammer,” Cherry uses her vivid classroom storytelling skills to paint us a picture of what life was like for black people in this influential Montgomery neighborhood during the Civil Rights Era and the bravery it took to stand up for themselves. Over the course of the hour-long tour, she shares her own inspiring experiences growing up in the segregated South and earning advanced degrees in library science and other achievements unimaginable when she was born.

The parsonage itself was placed on the National Register of Historic Places in 1982 and restored in 2003 to reflect its appearance during King’s time there.

On the front porch, we look out into the modest yard and imagine hundreds of King’s friends and neighbors gathered, armed and justifiably eager for retaliation just after the bomb exploded. At that moment, Cherry says, the young pastor not only urged non-violence, but managed to convince the crowd of it, too. This parsonage is often cited as the place where King laid the foundation for his doctrine of non-violence. 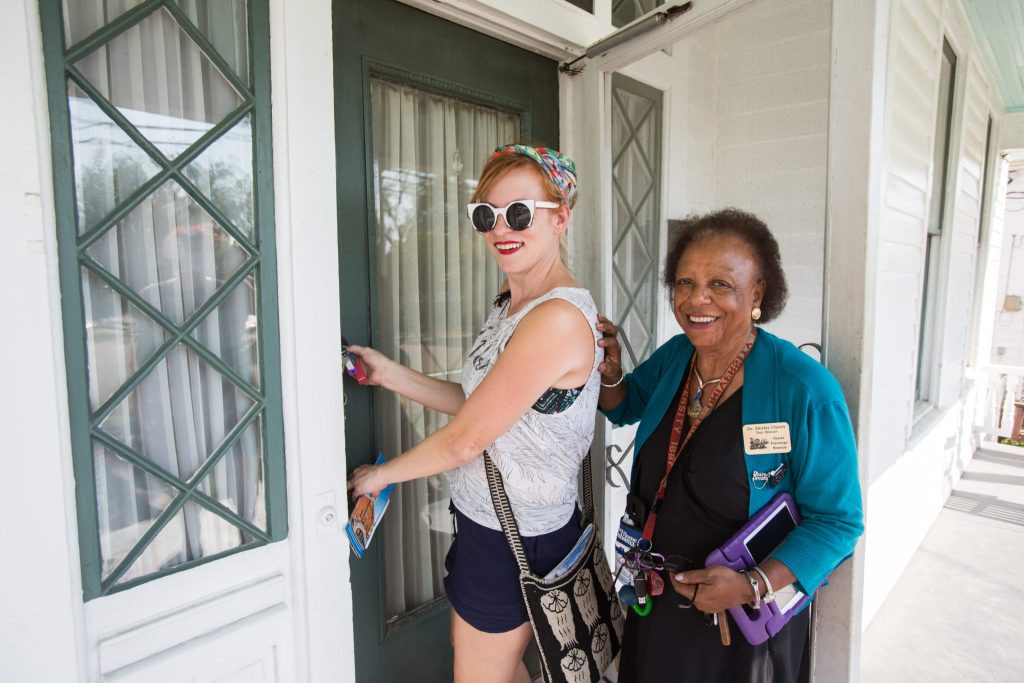 Then, Cherry hands me a set of keys reminds me I’m about to unlock the same door that King himself opened hundreds of times between 1954 and 1960. (No pressure!) I feel a little rush as the lock turns.

We see the phone where dozens of death threats rang through each day, the dining table where powerful activists gathered to plan, the book-filled study where King kept his prized record player and, on a retro kitchen table, a vase of artificial flowers King sent his wife (so that she would always have flowers from him, even after he was gone). 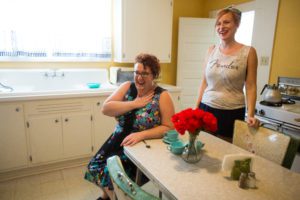 We promise we were reverent — but Dr. Cherry knows how to tell a joke. Photo by Kerry [email protected]

It was in that same kitchen, Cherry says, that a frightened King gave up his fear, coming to terms with his likely end and deciding to push forward despite it.

It’s the end of our tour, and we stand in electrified silence imagining the moment in the late 1950s before we exit. You know it’s a powerful experience when all four of us loud-mouthed broads go quiet.

Three doors down, the 90-something-year-old Vera Harris sits on her porch swing with her daughter Valda Montgomery. At the start of the interstate protest of bus segregation, Ms. Harris and her Tuskegee Airman husband housed the Freedom Riders in their large home. And it’s a matter of great debate among the locals whether Ms. Harris was packing the night the crowd gathered in front of King’s house.

An unofficial add-on to the Parsonage tour, the mother-daughter duo are often on the porch, happy to greet people wandering over from the museum with warm handshakes and conversation. Maloney buys a copy of Montgomery’s book Just a Neighbor, about growing up in that legendary neighborhood. Just sitting on the porch swing with this remarkable woman feels like an honor. 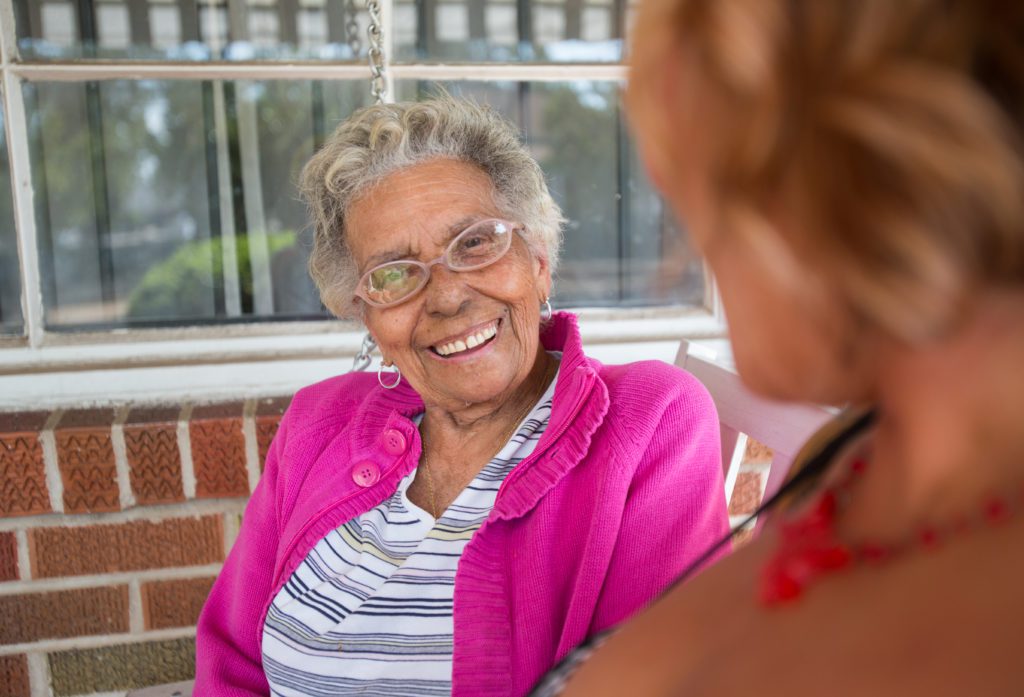 “This isn’t ancient history,” Maloney says later. “The people are still around.”

Montgomery has been called both “The Birthplace of the Civil Rights Movement” and “The Cradle of the Confederacy” – the rogue government’s first presidential home stands right around the corner. So, there’s a lot to unpack and to learn about here, and we really only had time to scratch the surface.

The Rosa Parks Museum, the Civil Rights Memorial Center and – of course – The Dexter Avenue Baptist church where King preached.

Hank Williams will have to wait. 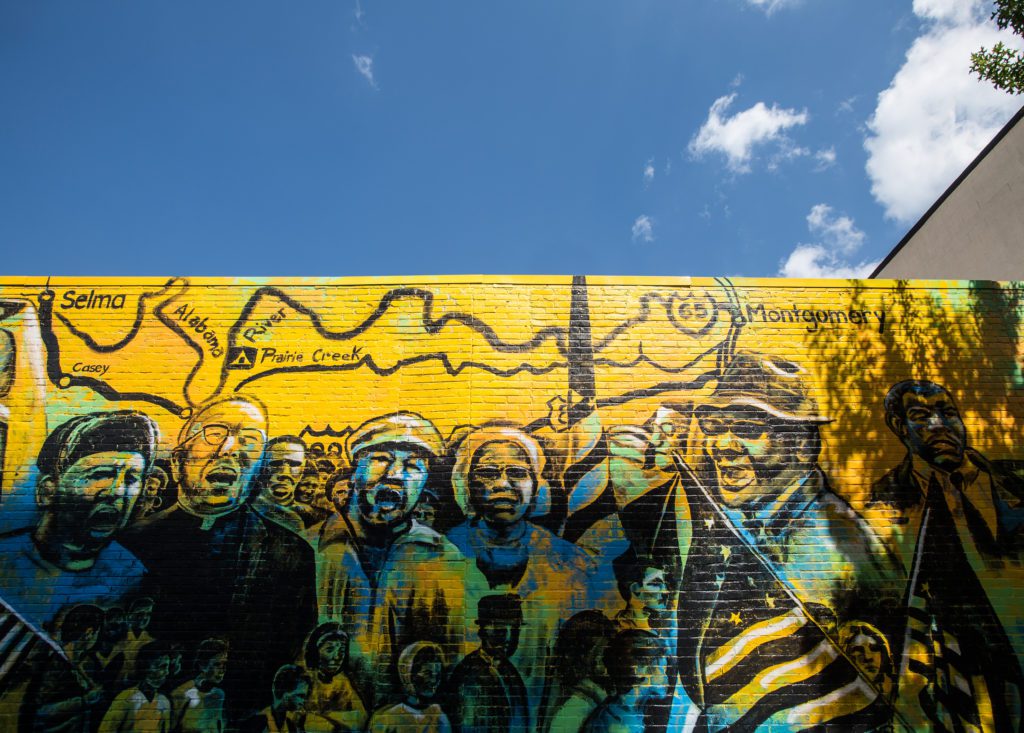 Tours on the hour except at noon. 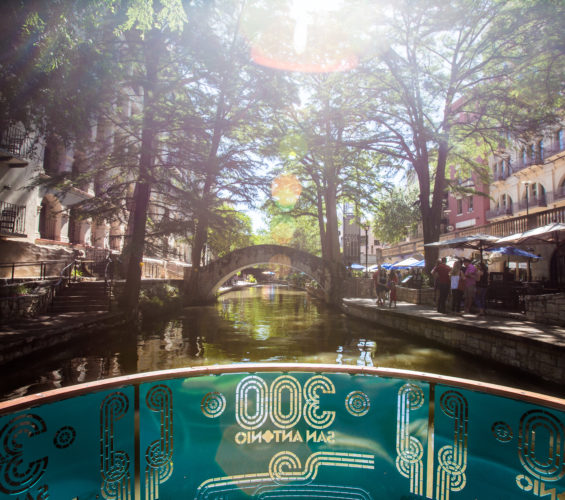 Six secret things to do in San Antonio this Tricentennial 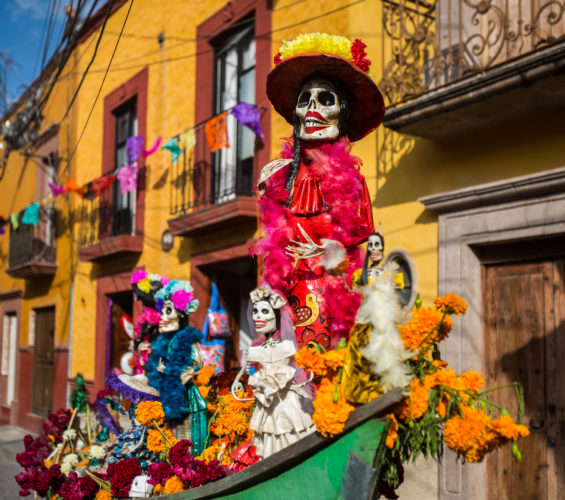 Your Day of the Dead Guide for San Miguel de Allende 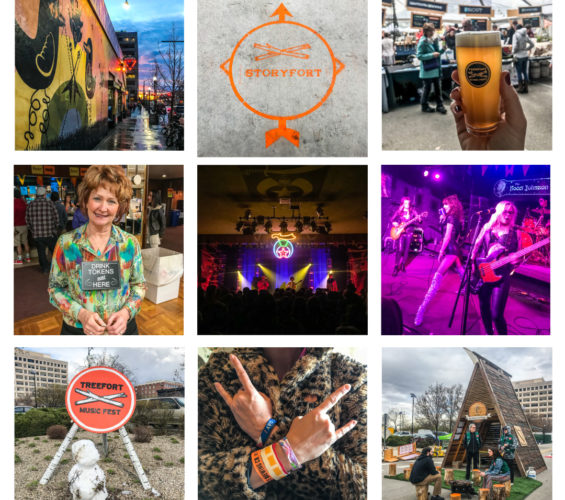