In New Orleans, drinking is serious business. The first cocktail ever poured came from Nola. Since then, we’ve invented a half dozen well-known recipes (and counting). We drink on the streets, at brunch and pretty much anywhere. And, of course, we host a week-long conference dedicated to all things booze — called Tales of the Cocktail — every summer. With bars on every corner and bartenders at their best, the options can be overwhelming. But look no further, we’re here to tell you what to drink in New Orleans, and where.

Back in 1838, Antoine Peychaud created the drink in a French Quarter bar and named it for his favorite French brandy, Sazerac-de-Forge et Fils. It’s the first cocktail ever invented, and it’s a New Orleans native. Don’t leave town without having one.

Also called the New Orleans Fizz, the drink was created in 1888 by New Orleanian Henry Ramos, owner of the Imperial Cabinet Saloon and later the Stag Saloon.

This drink wrongly gets clumped into a party drink category. But there is historical significance to the hurricane, and you have to try one. (Just not the sugar bombs served up at a certain O’bar just off of O’Bourbon Street. Not worth the hangover or the glass deposit fee you didn’t know you were paying.) Just step a few blocks out of the quarter to Seaworthy – you’re in luck if you’re also an oyster fan.

Not necessarily a New Orleans thing, but definitely a southern thing. If you’re not sipping one at the race track, you should at least be on a porch under an oak tree watching the street car roll past.

Drink the drink in the bar that bears its name. Arnaud’s bar and restaurant have a long, rich history in New Orleans. The custom-made bar top alone dates back to the 1800s. More recently, they won the James Beard Foundation’s Outstanding Bar Program thanks to head bartender Chris Hannah.

Rumor has is it the Vieux Carré was invented in the Carousel Bar inside the Hotel Monteleone in 1938. You can’t go wrong at the Carousel Bar. Go during off hours to get a seat at the bar itself, because it actually rotates. It takes 15 minutes to do a full rotation. Bring a friend and see how long it takes them to realize you’re moving.

Have this hangover cure on a Sunday morning at Vessel, because this bar is built inside of an old Mid City church. Amen.

This classic gets two entries. If you’re picturing Hemingway in Cuba, then stop at Manolito and pretend your in Old Havana.

If the word “daiquiri” conjures visions of giant Slurpee-esque frozen drinks in go cups, then we’ve got the spot for you, too.

Pepto-pink and a bonafide Nola institution, Gene’s Po-Boys stays open 24 house, sells a gallon of daiquiri for just $30 (bargain!), will add an extra shot upon request and — for the indecisive — will blend up to two or more flavors from their churning Slurpee machines.

The Brennan family is a powerhouse in the New Orleans restaurant world. It’s hard to escape their reach, but really, why bother. Brennan’s was Ella Brennan’s baby. She sadly passed away earlier this year. She changed the rules of breakfast and lunch when she invented the Jazz Brunch at this location.

Pirates Alley Café has been hosting pirates for hundreds of years, and you can still seen them hanging out in this quiet pedestrian-only street. They serve the green fairy from an antique absinthe drip. Even though it looks like a shot, we highly recommend you sit, sip and enjoy some of the best people watching in the French Quarter

If you’re looking for an excuse to go to this New Orleans food institution, start with $. 25 martinis at lunch. Commander’s Palace has been been on the forefront of the New Orleans food scene from the Garden District since 1893.

Most people will tell you to get a Pimm’s Cup at the Napoleon House, and they’re not wrong.

But the French Quarter’s newest cocktail hub is Longway Tavern, and their upscale Pimm’s Royal is the 2.0 version of the classic,

Hoping to do more than drink on your Nola getaway? Steal a few tips from our New Orleans bachelorette party weekend guide. Trust us, you don’t have to be tying the knot to tie one on. Wink!

Picking your favorite cocktail at Bar Tonique is like choosing your favorite kid. (Or, you know, wig if you’re not into the whole breeding thing.) Everything is great here. Don’t expect these expert bartenders to rush; they do it right. Every ingredient is made in-house. This one starts with fresh pressed ginger.

SoBou inside the W Hotel has one of the best happy hours in the Quarter. Appropriately called “Happier Hour” it runs from 3pm-6pm. But at lunch, they serve 25-cent vodka and gin martinis (limit 3) as dirty as you like. Their bar program is top notch, so feel free to drink adventurously.

Full disclosure there is not a lot the Traveler Broads won’t drink, but bloodies are one of them. However, we can safely recommend Atchafalaya for this eye opener, because you make it your own damn self. They offer a “Vodka Salad Bar” at brunch as well as live music so you can’t go wrong.

Latitude 29 is a trip to the islands down to every last detail. (Banana leaf coozies? Tiki idol coconut cream ice cubes? I mean. Come on.)  Have a Mai Tai, of course, but have one of everything and a bite to eat, too.

If you’ve made it this far in the to-drink list, you probably need to put some food in you. Check out the article on Nola’s up-and-coming foodie neighborhoods for Alabama Journey magazine.

A perfect pun on the famous New Orleans desert invented by the Brenan family in New Orleans. Looks like a smoothie, tastes like heaven. It’s the perfect summer desert drink. When the weather is nice, their outdoor dining is amazing for people watching. Inside the Black Duck Bar stocks over 170 rums.

NOLA is quickly becoming a Tiki meca. So much so that Cane & Table is already putting its own spin on classics. This pineapple sour has

But really, everything they do is quality and worth trying.

A nod to Stranger’s with Candy, this concoction contains all medicinal ingredients and surely cures all. Whisky, Aperol, orange bitters, ginger-clove syrup and activated Charcoal, with a burnt orange garnish. 10ft. Pizza is an extension of Red Truck Gallery on Royal St., so this bar has exciting art and the best selfie bathroom in town.

Simply listed as Mezcal, Meauxbar mixes this smoky tequila with watermelon, Cappelletti, grappa, lime, crab boil, celery bitters. This adorable restaurant and bar is a locals favorite where you can get a cozy window seat and watch the streetcar go by. We love this spot so keep an eye out for us 😉

If you’re familiar with the Bushwacker – a Gulf Coast favorite – then you know what to expect. If not, think boozy milkshake.

Tujague’s has been around for 160 years. The French mirror at the stand up bar was shipped from Paris in 1856. It’s a classic New Orleans experience, with the city’s first stand-up bar on one side and a white linen tablecloth dining room on the other. For this stop, stick to the bar and and order the grasshopper, which is what they’re famous for.

It’s mint chocolate, which makes it the perfect alternative for desert. (Or, in our case, the perfect after-dessert dessert.)

Stamped with their signature rabbit (from the Caribbean version of the Brer Rabbit) this flip packs a complex punch with green chile vodka, pisco, grapefruit and egg white. Owner Nina Compton took home Best Chef South at the James Beard awards this year.

The Next Episode is a champagne cocktail twist on a classic hurricane. Cure just took home the James Beard Foundation’s Outstanding Bar Program this year. They have mastered and remastered every classic. If you only have time to try one bar, this should be your spot.

Also check out our French Quarter Off The Record guide for the best places to find these cocktails and more in the French Quarter. 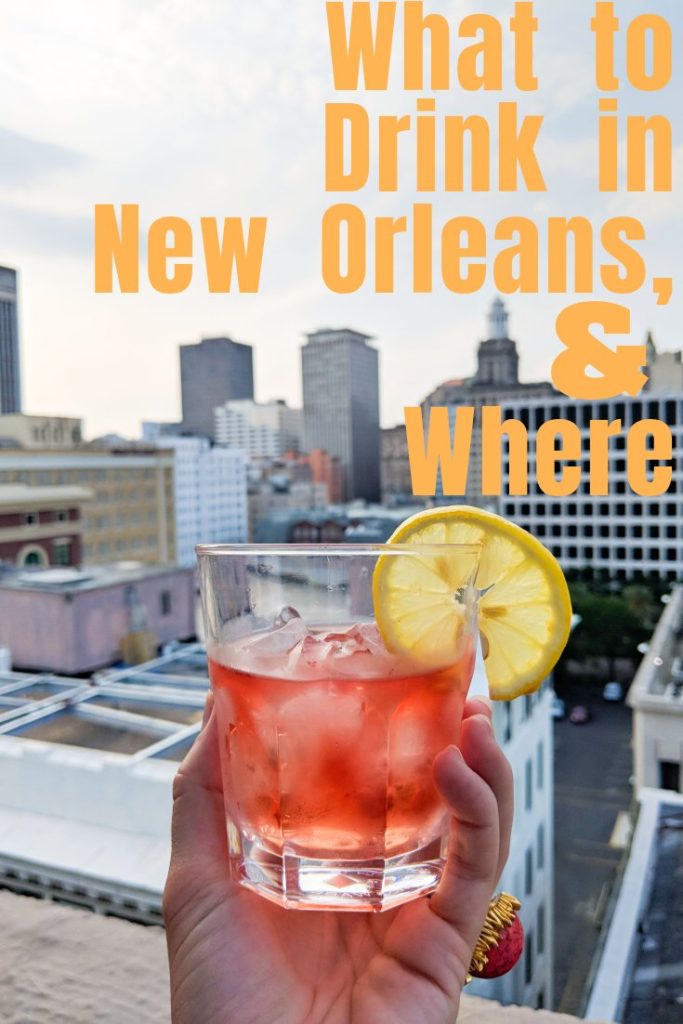