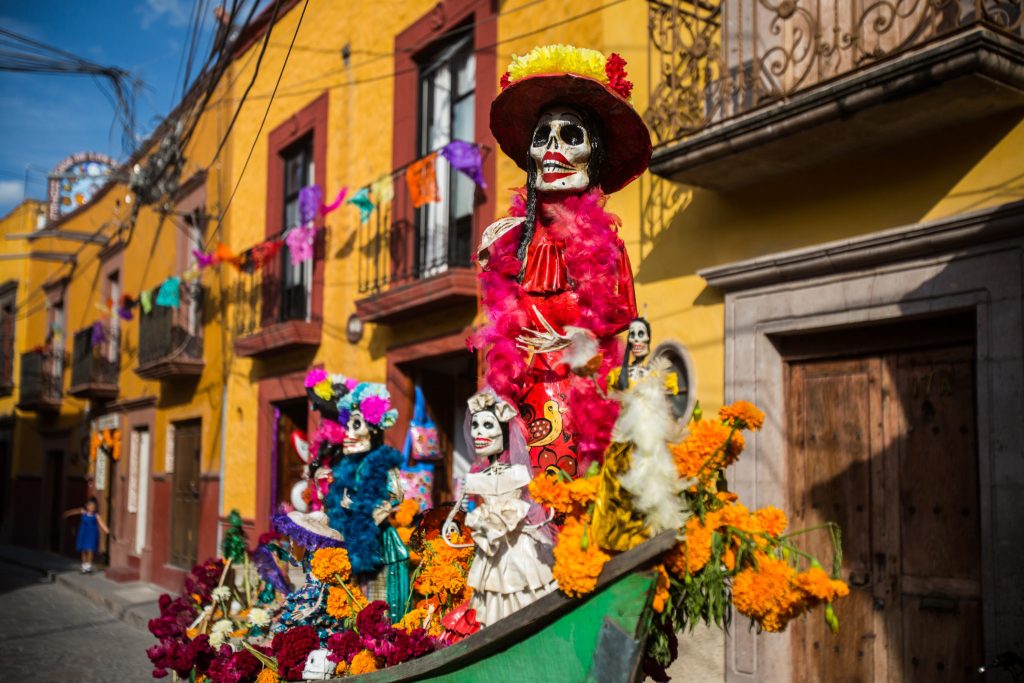 Ah! San Miguel de Allende, a town so gorgeous the whole thing is designated a UNESCO World Heritage site. This charming Mexican town is just plain irresistible during Dias de Muertos, when visitors drift along cobblestone streets past doorways draped in marigolds and the pink spires of the Parrochia jut into a clear fall sky. This beautiful holiday centers on cemeteries, family altars and centuries-old traditions. So how, as outsiders, can we participate respectfully? We wrote this Day of the Dead guide to help answer that very question.

First, a little background. We probably don’t need to say this, but since it’s a Day of the Dead guide, here goes: Dias de Muertos might fall just after Halloween, but it’s not a dress-up, drink-all-night homage to the spooky. (If that’s what you want, visit New Orleans!) Mexican families set aside the first two days of November to remember, honor and commune with their dead without a hint of the macabre.

This Day of the Dead guide will give you a glimpse of the ever-evolving traditions behind the holiday as well as some don’t-miss tips for celebrating in San Miguel de Allende. 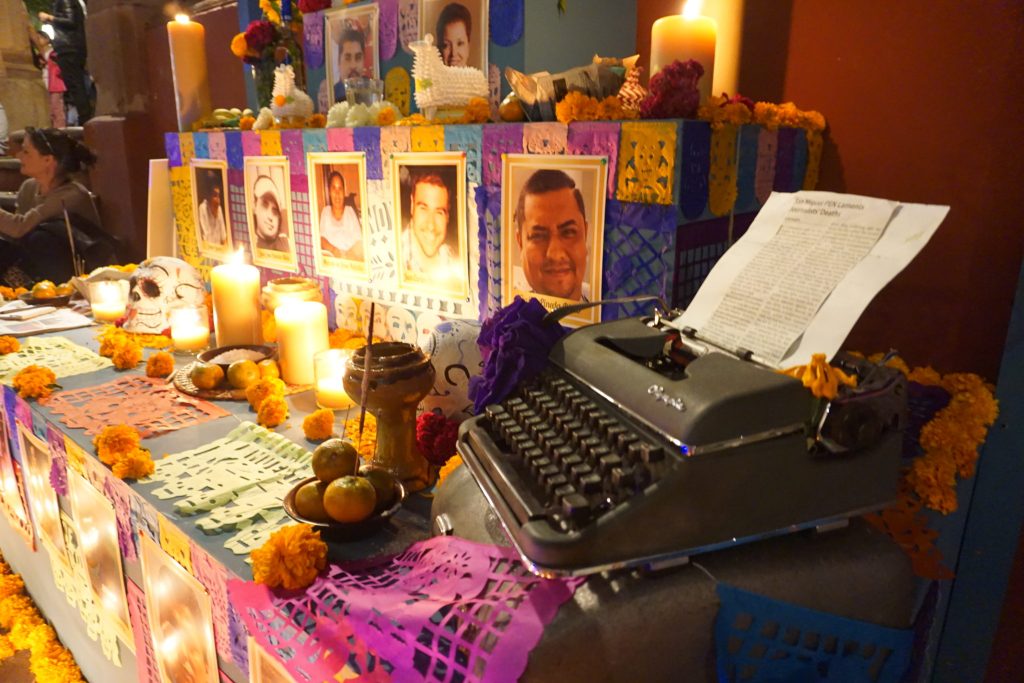 Every altar says “welcome back”

Locals erect ornate altars to deceased loved ones everywhere — the public square, our favorite lunch spot, their homes, etc. Festooned with marigolds, the scent of which is thought to attract the spirits, each is personalized with favorite books, musical instruments and more to draw in specific people. On an altar dedicated to the journalists murdered in Mexico in 2017, we found a typewriter, notepad and other tools of the trade. One, dedicated to pets, had a favorite chewed shoe; another, a much used martini shaker.

Common to most altars are alcohol, tobacco and soda — because the spirits are coming back to party. (Those are our kind of spirits 😉

Do yourself a favor and spend a few minutes trying to picture the person to whom the altar is dedicated. Some business owners are even happy to share stories about them.

The skeletons are fun, but new

It’s a little complicated. But a Day of the Dead guide can’t NOT talk skeletons, right?

Mexico’s indigenous people originally celebrated their dead for two whole months before the Spanish showed up and forbade it. Way back then, there was no concept or imagery of skeletons involved. The skeletons came on the scene in the early 1900s when political cartoonist José Posada wanted to illustrate the revolution without identifying its players. One of his characters — a haughty, well-heeled skeletal woman named Catrina — was drawn to mock those who adopted high-falutin’ European ways. She took off in a big way. People eventually started incorporating skeletal painters, farmers, mothers, etc. into their altars in homage to the deceased.

Parading through the streets as a Catrina (or Catrin, for the gentlemen), is a relatively new phenomenon in San Miguel. One woman started doing it less than two decades ago, and parading started eight years later.

Face painting is mostly for kids and Houstonians

As a costume addict and a tries-to-be-conscientious traveler, I struggled with the face painting question. Can I? Should I? In the end, I didn’t want to.

The most grown-up face painting we saw was at a party hosted by the lovely (and super fancy!) Rosewood Hotel, tickets to which included the iconic wide-brimmed Catrina hat, cocktails, face painting and a spot in a small, walking parade for attendees from the party back to the hotel. Spanish was rare (weirdly, everyone seemed to be from Houston?) and one woman had the audacity to tell me the parade was better than Mardi Gras. (Bish, I will cut you.) Basically, after that, face painting seemed a little inauthentic. FYI – There’s another skeleton parade that’s more locals-focused, but we didn’t find out about it in time. Could have been a game changer.

That’s not to say you shouldn’t paint your face! The streets leading into the main square are lined with artist-vendors waiting to do you up. On Nov. 2, we saw adult locals in face paint along with plenty of kids and lots of tourists. You won’t be out of place in the square, just don’t wear skeleton makeup to the cemetery.

Looking for some other Instagram ops while you’re in San Miguel? Here are our favorites.

Don’t be scared of the cemeteries

I wish we’d had a Day of the Dead guide before our visit. It took us a minute to figure this one out. There are two cemeteries you need to know about. The old cemetery — called San Rafael — has been closed for 50 years and only opens on Day of the Dead. It’s gorgeous, but there’s not a lot of activity.

The real action is at the Panteón de Nuestra Señora de Guadalupe. It’s newer and completely packed with people cleaning graves; decorating with flowers, candles and personal items; singing songs; drinking beers; and generally celebrating the lives of their loved ones. Roving bands play throughout the cemetery on Nov. 2.

Know the Day of the Dead schedule

Nov. 1 – 2: Cultural dances and performances in front of the Parrochia and other nearby parks. Check the local paper, Atención, for details.

Nov. 1 at the cemetery: The day that people honor the graves of lost children and innocents. We visited that day, and it was much more sedate and somber.

Nov. 2 at the cemetery: Locals honor adults and the elderly who’ve passed away. It’s not a rager, but it’s much more of a party. Bands circulate through the cemetery playing music, people gather to tell stories and decorate graves, picture taking seems a little less intrusive. (Ask, obviously – Puedo tomar una foto?)

October 30 – Nov. 1: Kids ask for candy in the square. Bring them some, because they are adorable! (And buy it before you get to the square. There’s a fancy candy store there, but it’s pricey and probably not what the kids want anyway.)

Note: San Miguel has been an expat town since WWII and a tourist destination for almost as long. Basically, the locals are accustomed to U.S. visitors. So, the etiquette rules in this Day of the Dead guide to San Miguel may not apply if you’re heading to a less traveled area of Mexico. Every town does it a little differently.

Have something to add to our Day of the Dead guide to San Miguel? Let us know in the comments!

(And special thanks to San Miguel de Allende addicts and Traveler Broads “buddies for life” Ed and Richard for all their fabulous advice in advance!)

Need help getting from the Mexico City airport to San Miguel de Allende? We got you!