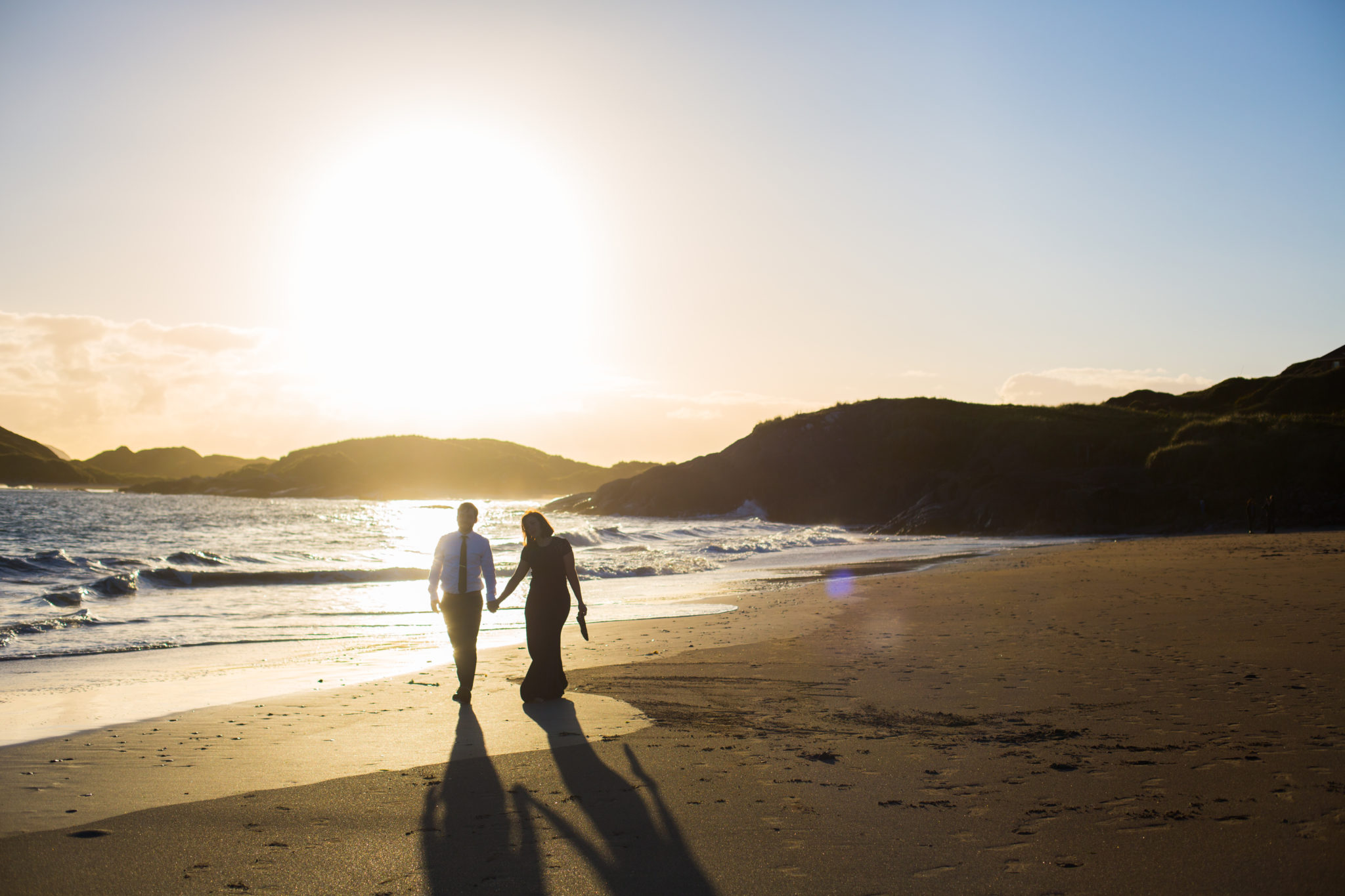 On a map of Ireland, the tiny village of Waterville sits about as far west and south as you can get. Even Irish people shake their heads and assume you’re mangling the name of high-end crystal capital Waterford when you mention Waterville to them.

So forgive us for having no idea what we were in for when our good friend Olivia chose this little town at the apogee of the Ring of Kerry as the homebase for her informal destination wedding in September.

Fortunately, our pals got a much cooler start to their trip.

Liv, hubby-to-be Brian, Manny, Will and Tim have just returned from following in Luke Skywalker’s footsteps on the craggy shard of prehistoric sandstone that is Skellig Michael, an island seven miles offshore.

More than 1,400 years ago, intrepid monks in search of solitude hand carved a monastery out of the 650-foot “rock in the sea,” the Gaelic meaning of the word “skellig.”

So naturally, when a contemplative Jedi needed some alone time, filmmakers chose the Skelligs (there are two). In both Star Wars: The Force Awakens and Star Wars: The Last Jedi, the wild and otherworldly landscape of Skellig Michael serves as the site of one of the first Jedi temples.

Light saber-set aside, the UNESCO World Heritage site also wows visitors with its early Christian ruins and crazy flocks of seabirds like Razorbills and Puffins (summer time through mid August). Ferry’s to the island leave nearby Portmagee Harbor at 10:30 a.m., weather permitting.

And, with that ladies and gentlemen, the action-adventure part of our tour of the Irish coast is concluded. 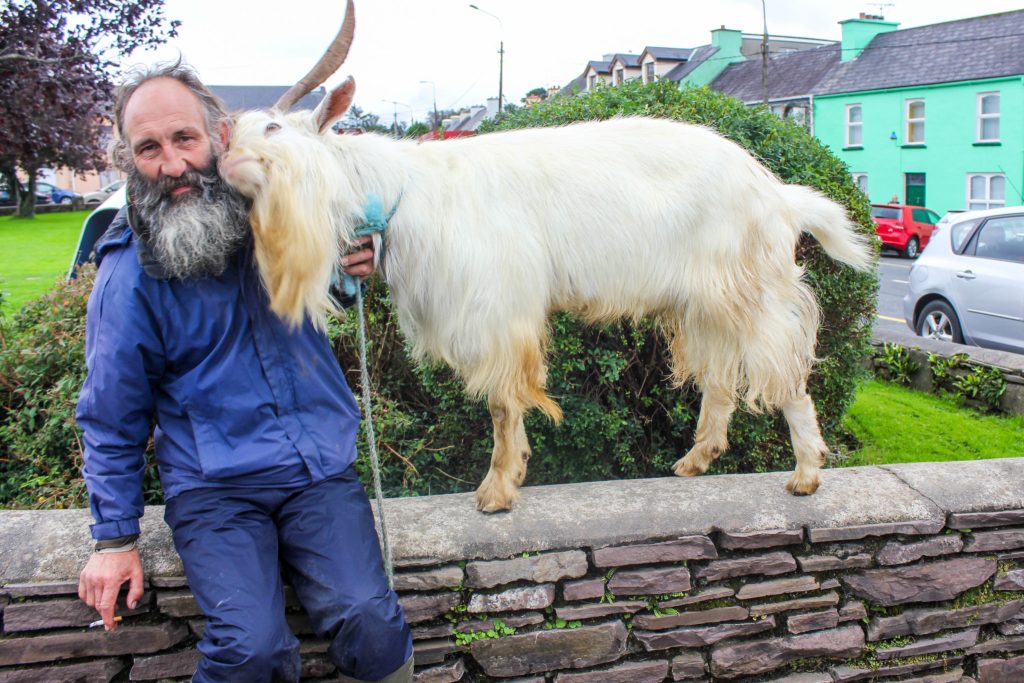 What Waterville lacks in thrills, it makes up for in country charm, with a handful of traditional pubs and a long stretch of strollable seaside that begs you to don an oversized wool sweater (and, I dunno, a pipe?) for a little sightseeing. Finding something warm won’t be a problem; Waterville is sheep country. Even the Charlie Chaplin statue — the silent star vacationed here for more than 10 years and has since inspired an annual film fest — wears a scarf the day we pass by. Check out the Waterville Craft Market for wooly knitwear and other Irish classics, like some of that Waterford crystal.

Maybe it’s being so far away from a big city, but each of the little towns strung together between roadside vistas and historic sites on the Ring of Kerry has developed it’s own little quirks. Just up the road in Sneem, for example, an agressively friendly goat named Puck is a fixture at a little park off the main drag. Bridging the gap between barnyard animal and lapdog, his owner lets him snuggle up to — and occassionally knock over — visitors for donations.

We spend several days exploring the Ring, discovering some beautiful (and nearly empty) beaches, live music venues and trying — eek — the area’s famous blood pudding, which turns out to be delicious.

My favorite stop comes at Ross Castle, built by an Irish chieftan to whom I may or may not be related. (So, basically I’m a princess, right?) 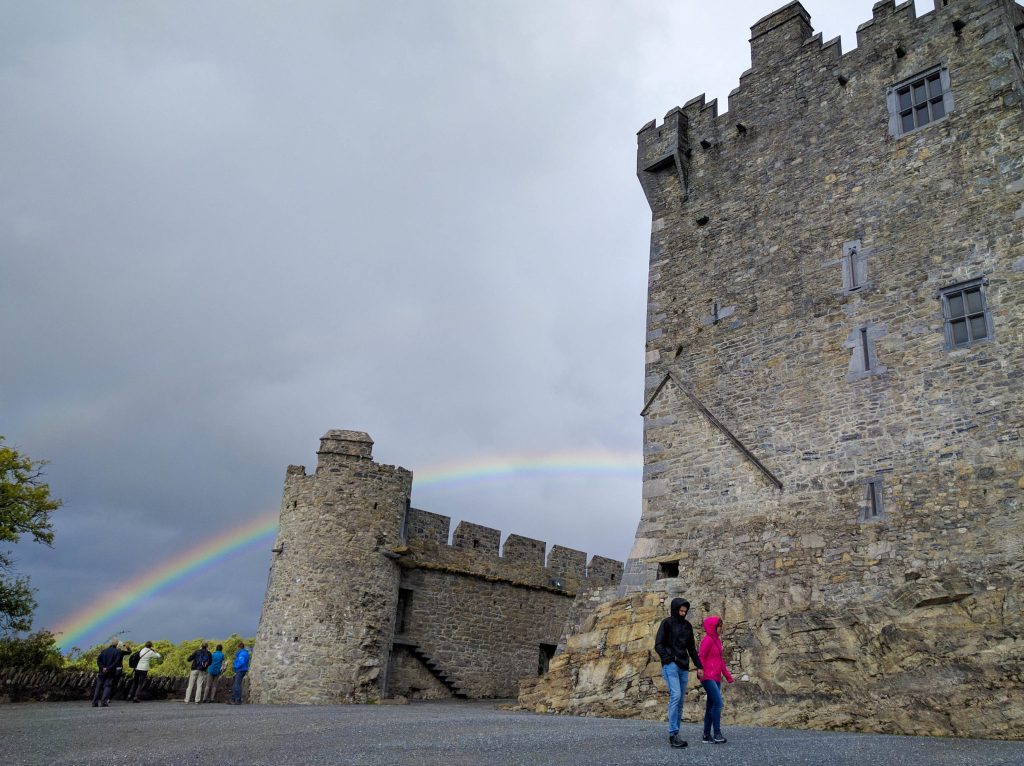 This ain’t a Disney castle

I kid you not, a rainbow appeared over the hills surrounding the castle when we arrived — but that’s where the Disney ends.

A tour of Ross Castle’s simple, five-story square tower, offers a glimpse into the lives of Midieval dwellers that goes from fascinating-but-less-than-glam (rich people slathered themselves in goose fat to stay warm in winter) to the downright downtrodden (25 servants piled together in a cramped room the size of a small walk-in closet to sleep).

The “privy” was a shaft carved into thick stone walls that dropped waste down four stories. The amonia updraft was used to kill off bugs in clothes that hung in the adjascent hallway because — you know — goose fat.

Still waiting to see how you animate that.

Ross Castle sits on a Lough Leane (a lake). In the morning and early afternoon, take a boat ride out to Innisfallen Island, the site of another monastic ruins dating back to the 600s. Here, monks drafted one of the earliest histories of Ireland — the Annals of Inesfallen — which the British took to Oxford and refuse to give back. (Our sweet tour guide almost cried talking about it.)

For a more modern look at Irish history, nearby Muckross House offers tours of the 19th century Victorian mansion, its gardens and a handful of outlying farms. 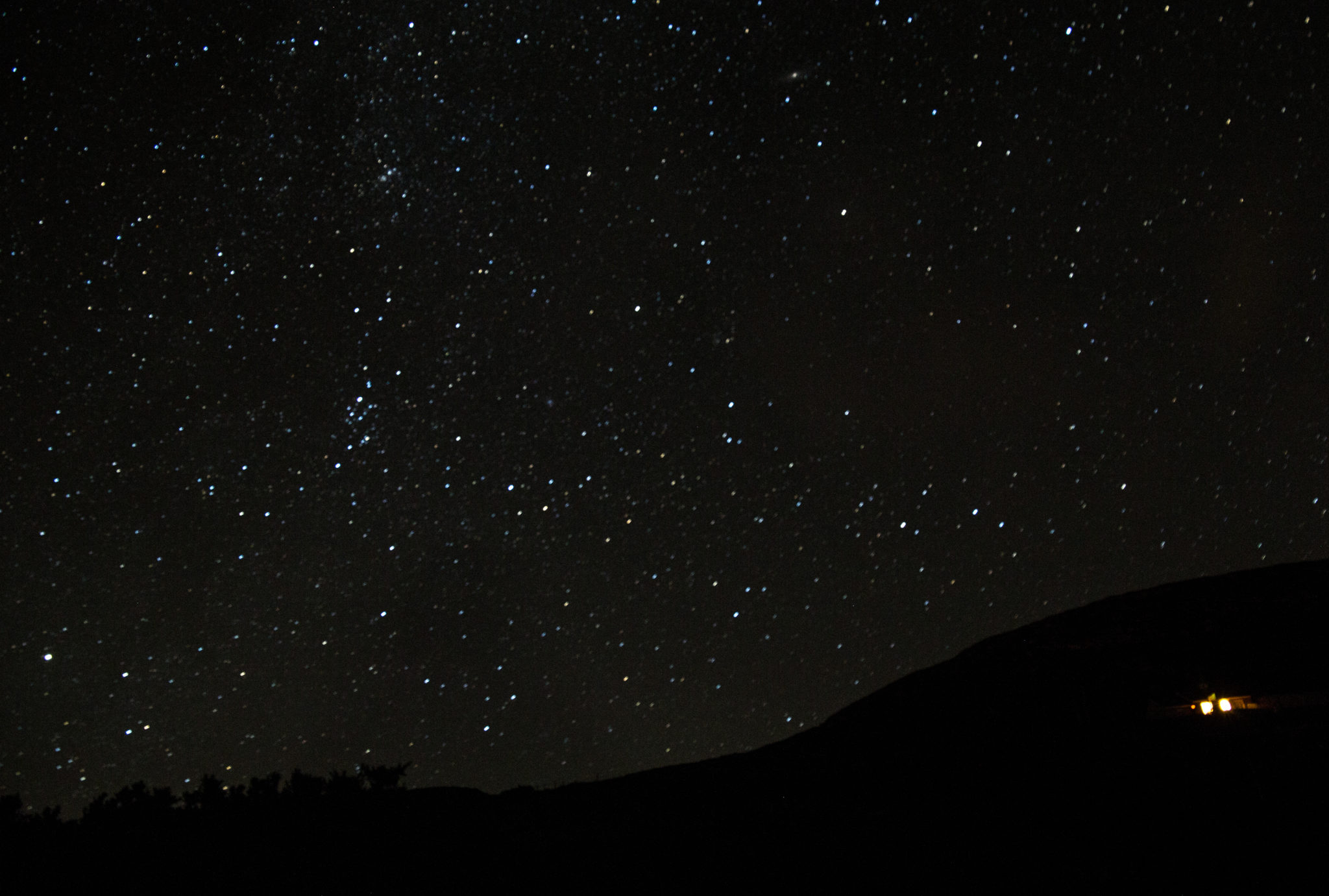 From sunset to moonrise

On one of our last nights in Waterville, we learn that Chaplin is far from the only star Waterville is known for. Lucky for us, we’re smack in the thick of one of three Gold-Tier designated dark-sky reserves on the planet — and the only one in the Northern Hemisphere.

We ransack our Airbnb for binoculars, but you don’t need special lenses to see the Milky Way poured out like tiny opals in the inky night. Wrapped in blankets and extra sweaters, we lay on the carpark pavement taking advantage of the time between sunset and moon rise to wonder at the nebulas, constellations and far away galaxies.

Even as I keep my eyes peeled for a shooting star, I know I couldn’t wish for a more perfect ending to our stay in Waterville.

Go: This will not be easy. The best advice I can give is to learn to drive stick, rent from anyone but Budget, get a Xanax script and don’t let Maloney copilot. (She’s great with directions, but all the cringing and yelping is a little unnerving.) You can book bus tours of the Ring of Kerry, but you’ll be traveling on someone else’s schedule with a few dozen strangers. The highway and the Ring of Kerry are relatively easy, but avoid narrow country roads at all costs — even if Google tells you it’s the shortest way. Waterville is about five hours from Dublin airport on a main highway most of the way. You can also fly into County Cork, but you’ll have a more terrifying drive.

See: The Skelligs are a must see when in Waterville. If you’re visiting in August, pop into the Charlie Chaplin Film Festival — and entire event dedicated to a guy who vacationed there decades ago. (Wonder what they’ll do to commemorate the Traveler Broads!) Killarney National Park is much more than Ross Castle and Muckross. Find out more here. Oh! And did I totally forget to mention Waterville is a premiere golf destination? Just because I know almost nothing about the sport, doesn’t mean it’s not a big deal.

Stay: We stayed at an Airbnb for less than $150 a night for a modern home that comfortably slept 8 and boasted a stellar view of the rocky emerald countryside down to the bay. The Butler Arms is an upscale option and where Charlie Chaplin vacationed. But there are plenty of cute little inns and traditional B&Bs to choose from.