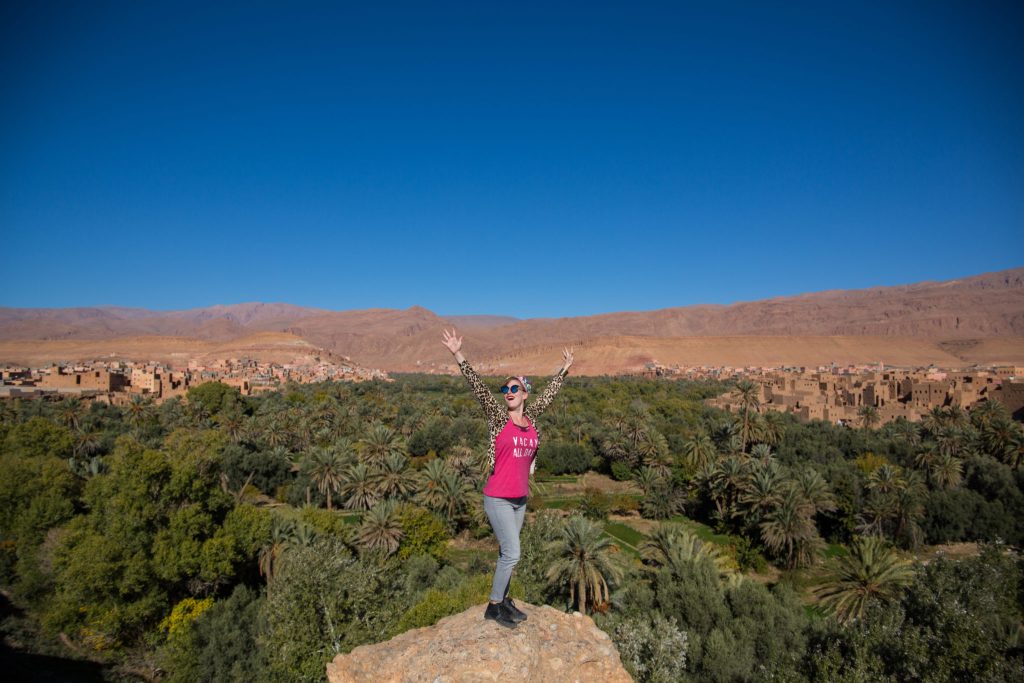 Mesmerizing sand dunes, fuzzy camels, starry skies, and incredible Berber hospitality. Visiting the Sahara Desert in Morocco was one of my all-time favorite travel experiences. And I almost left without doing it!

I worried about cost and time. Maloney had to convince me to squeeze the three-day excursion from Marrakech to Merzouga into our round-the-world itinerary. (Note: This almost makes up for her tossing around in the bottom bunk of every single hostel we stayed in. The struggle, guys.) To save you the hassle of bringing along a Maloney to convince you to do fun things, I’m just going to tell you right now: Absolutely, under no circumstances leave the country without visiting the Sahara Desert in Morocco.

Yes, Erg Chebbi‘s singular scenery is the jaw-dropping sort that Instagram eats up. But a Sahara trip is much more than the ultimate photo op. We got a crash course in the culture of the Berber people — indigenous desert dwellers, herders and nomads who the pre-date Arab colonization of North Africa. Fun fact: (The name they call themselves is “Amazigh,” and they definitely live up to the title 😉

There was so much to see, we could have easily added a fourth day. I’ll tell you how we did it at the bottom, but first! here are some highlights:

Aït Benhaddou was the most camera-ready stop on the way to Erg Chebbie. A UNESCO world heritage site, this fortified village has provided the backdrop for 20-plus movies. Mostly a tourist stop, you’ll recognize the town in scenes from Gladiator, Game of Thrones, and Prince of Persia.

It’s true star? A tall, gregarious man who goes by the name Cous Cous (and who occasionally plays an extra). He ushers us into his home to see a collection of movie props, a rug-strewn room where his family gathers for meals and his indoor goat pen.

On our way out, Cous Cous shows us photos of his family with Ridley Scott and press clippings that have spread Aït Benhaddou’s fame worldwide as well as some artisan jewelry.

Ettiquette Note: Bring extra cash for handmade souvenirs, which locals sell in lieu of collecting tips for their services.

Our favorite rug shop in all of Morocco

The most dangerous man in Morocco is an very nice rug dealer we visited on the way to the Sahara. Berber carpets — known for their bold designs and bright colors borrowed from natural sources like pomegranate rind, saffron and henna — hang in every dazzling hue throughout his Teneghir shop.

In a large showroom, a craftswoman patiently combs and hand-twirls camel hair into yarn. (We try. It’s tough!) Rug weaving techniques have been handed down through the Berber culture since the Paleolithic Era. Over mint tea, we’re shown several, but I already know the one I want.

Neon and primary colors pop from a slate gray field. Our host explains that the triangle-backed shapes represent camels, squiggly lined squares are casbahs, and so on. He gives a price much lower than similar carpets in Essouira or Marrakech. And, did he mention, they ship AND take credit cards. What did I tell you? Dangerous!

(Not our first carpet rodeo. We’re easy marks. Read about how we did in Istanbul.)

When it’s so tough getting from Point A to Point B, you don’t turn away travelers, Ahmed explains. Cities even set up camping areas with wells outside of town to give a resting place to the remaining nomadic goat herders.

For Western tourists, this innate graciousness means long and fascinating conversations in pantomime and broken English about our very different ways of life. Luckily, the Moroccans we run into are excellent storytellers with wicked senses of humor. (Our driver, “Are You Crazy?” Ahmed, makes us try to recite impossible Berber tongue twisters, for example.)

We stayed one night at the oasis-like riad Le Jardin de la Source in Boumaln de Dades (a great resting spot after a long travel day) just off the Dades Gorge. There we found another excellent example of Berber hospitality: Omar, who explained everything we asked about, from traditional Berber dances to the riad kitty Meow’s love of tea biscuits.

(You know who else is kind? The Balinese. Read our favorite tips for visiting Bali.) 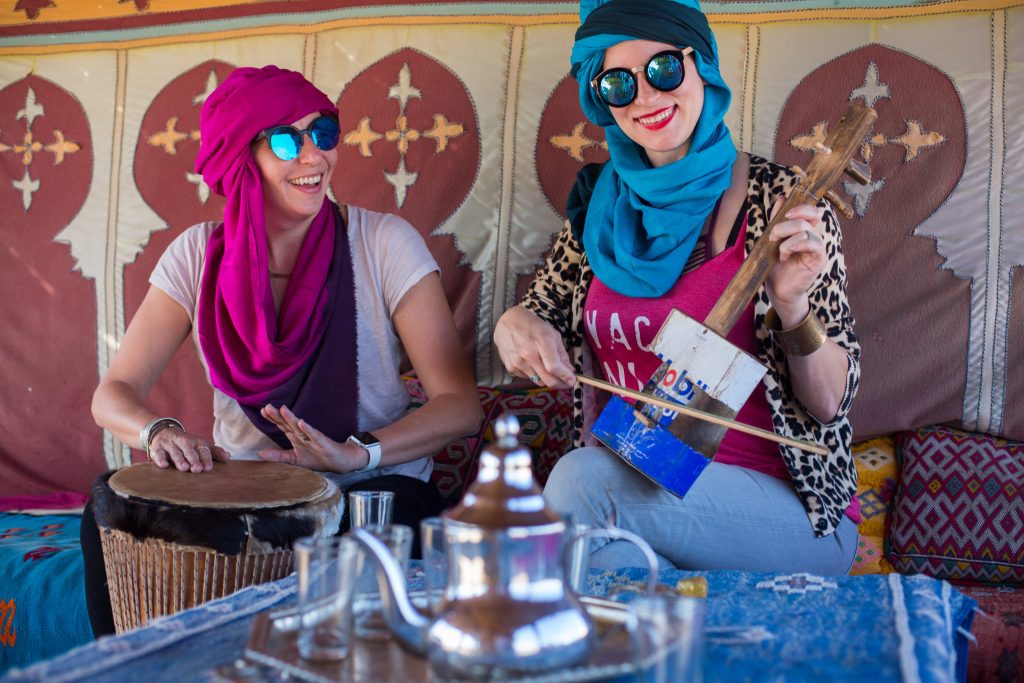 Yeah. We’re in a band now. No big. Photo by Ahmed! @TravelerBroads

A sneak peak at desert life

We saw a woman’s co-op hand processing argan oil beauty products, walked through a string of hand-carved underground wells that brought water to desert people, saw an actual oasis and sat in for an impromptu music sesh with instruments upcycled from oil cans and other debris.

It’s a long day-and-a-half drive from Marrakesh to Merzouga, but the roadtrip showed us a side of Morocco invisible to travelers who stick to the cities.

True, the stops were all brief and definitely set up for tourists like us (and we felt obligated to purchase something at each). But, when you’re traveling without a language in common, sometimes you need some help scratching the surface.

(We’ve definitely been on tours where you get zero interaction with the culture. Here’s how to avoid that fate in Brussels.)

On the backs of legends

In Merzouga, we lock up our luggage at a small inn, grab overnight bags and meet two music icons — Bob Marley and Jimi Hendrix. (True story: Shakira couldn’t make it)

Both camels appeared well treated — no sores, no missing teeth. When we asked our driver about the treatment of camels in the Erg Chebbi area, he said they were treated like friends. (At first I thought he meant they stole each other’s jewelry, but I think he just means “kindly.”) While Berbers don’t typically ride their camels, they use them to transport goods far heavier than us across the desert as they wander great distances, he told us.

In a tilting, back-to-front process, Bob Marley gets to his feet and sets off between three story dunes. With the setting sun bathing the scene in bright orange, it feels like wandering through another planet. In all, it’s an hour-long ride to camp. We take a million selfies, because we’re basic like that. We ask our guide Mohammed if he likes music, and he makes the mistake of saying yes. Surprisingly, he’s never heard Toto’s Africa before.  (Or maybe our rendition is unrecognizable.)

(Like your sand with a little more water? Here’s how to pick the perfect Greek beach.)

The ultimate camp out

Imagine perfectly prepared tagine, comfy beds with thick blankets, a crackling campfire, a zillion stars and — best of all — guys with musical instruments who know how to play something other than Jack Johnson. How could you not fall in love with the Erg Chebbi?

We arrive at a surprisingly well appointed camp — I mean, running water and a toilet? — just in time to climb a massive dune and watch the sun set over cups of mint tea. Then, after dinner, Maloney and I pile onto thick mats around the bonfire. Our host Hassan (who has the funny habit of raising his hands in the air and shouting “Africaaaa!”) and his buddies play traditional songs until the moon rises. You can tell these guys really love hanging out with each other.

Bonus: The Sahara boasts some of the darkest skies in the world — perfect for stargazing on a clear November night.

(You know where else has crazy good star-gazing? Ireland. Here’s where to find dark sky.)

Tips for Visiting the Sahara Desert in Morocco

Okay, as promised, here’s how we did it!

Pick-up/Drop-off: At our riad in Marrakech. (They also pick up from bus stations, airports, etc.)

Itinerary:  Day 1: Drive Marrakech to Dades Gorge. Overnight at a hotel the tour company arranges.  Day 2: Drive Dades Gorge to Merzouga, a small village on the edge of the Erg Chebbi dunes. Lock up bags at Hassan’s inn. Ride camels ~1 hour to the desert camp. Overnight at camp.  Day 3: Leave desert. Drive 9+ hours back to Marrakech.

Not included: Some meals, money for souvenirs along the way. 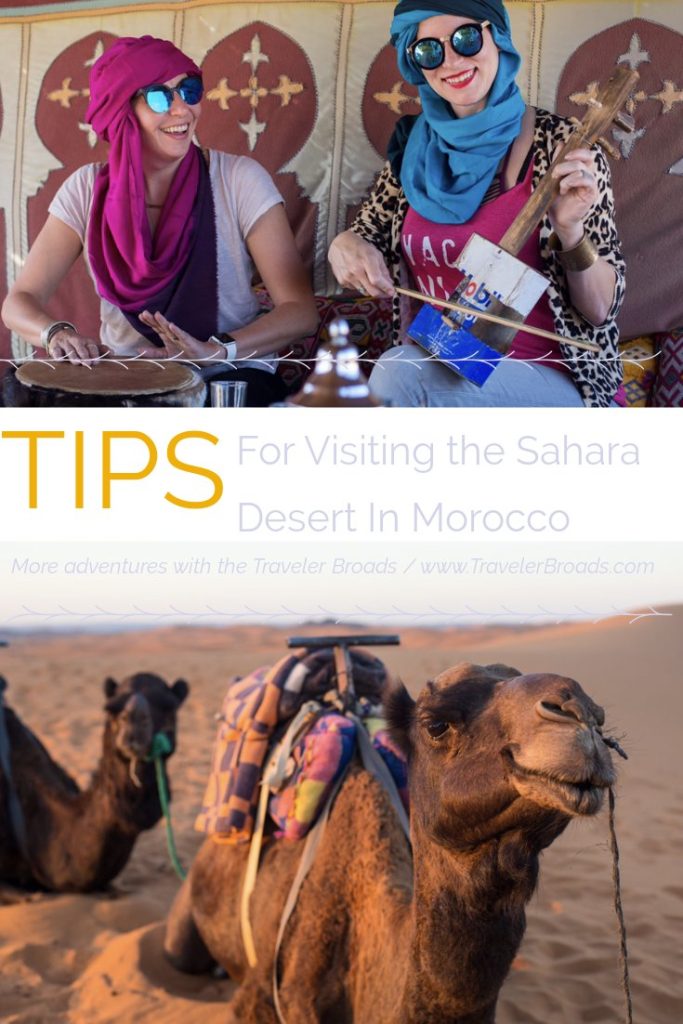 73 thoughts on “Tips for Visiting the Sahara Desert in Morocco”